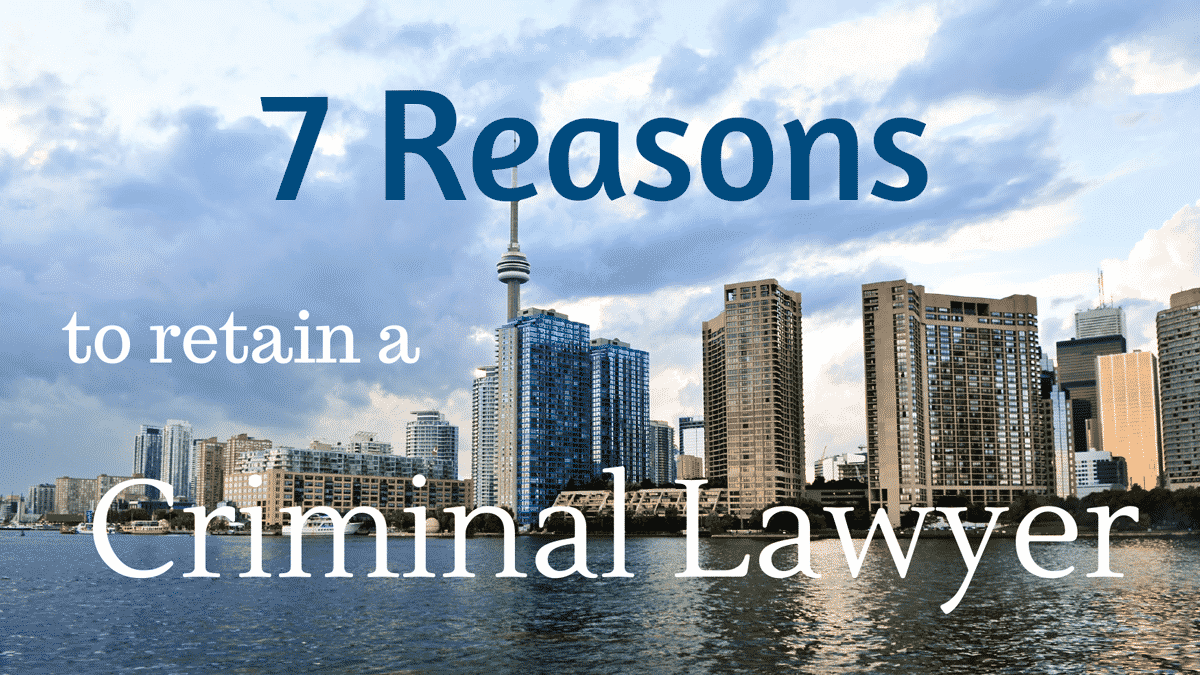 When approached by potential clients who have been been charged with a criminal offence in Ontario such as assault, theft, fraud or impaired driving, I am often asked what value I can add to their situation.“Why can’t I just plead guilty and get it over with?” they often ask.

Some, in an effort to save money, choose to “read up” on the law and defend themselves. In other cases, clients wait until the last minute in order to retain me as their criminal defence lawyer. Perhaps this is an effort to save costs or wishful thinking that the charges will magically disappear in the meantime. Unfortunately, this is rarely the case.

#1: A criminal defence lawyer can attend court on your behalf.

Once retained, a criminal defence lawyer can attend court in Ontario for most pre-trial appearances on your behalf. This means that you don’t have to miss work in order to attend court, and can be quite convenient if, for example, you live in Mississauga but were charged with impaired driving in Newmarket. It also saves you the emotional stress of standing before an Ontario judge or justice of the peace and speaking before the court.

In many criminal offence cases in Ontario, certain key evidence or witnesses may no longer be accessible or available shortly after the alleged events took place. An experienced criminal lawyer will move quickly to preserve this evidence and interview key witnesses while the events are still fresh in their memory. The use of video surveillance footage can often be instrumental in defending assault charges in Ontario and other similar charges. In many cases, be this can mean the difference between a conviction or an acquittal.

#3: A criminal defence lawyer can ensure all legal documentation is in place.

The criminal justice system in Ontario is very technical in nature, and the process and form of documentation is often prescribed by law. There may be technical defects on the charging documents that only an experienced criminal lawyer would detect. In some cases certain oral statements should be made on the court record early on in the process that can significantly help the accused and his/her prospects of obtaining an acquittal or stay later on in the process. Once missed, these opportunities may never be regained.

#4: A criminal defence lawyer can advise you to plead guilty or go to trial.

An experienced criminal defence lawyer in Ontario will be able to review the disclosure provided by the Crown attorney and assess the merits of the case and possible defences. In some cases, there are prescribed time limitations on when an accused can make a guilty plea in order to secure a better sentence. A skilled criminal defence lawyer will be able to advise as to the strength of the Crown’s case and whether (and when) an accused should plead guilty or exercise his/her right to a trial.

#5: A criminal defence lawyer can meet privately with the prosecution to discuss your case.

Once disclosure has been obtained and reviewed, a criminal defence lawyer is able to set up a private meeting with the prosecutor in order to discuss potential outcomes of the case. These “Crown Resolution Meetings” are extremely helpful in determining the Crown’s position and, if a guilty plea is to be made, securing the best possible outcome for the client. Crown attorneys are limited in what they are able to discuss directly with accused persons and, for this reason, many prosecutors refuse to meet directly with accused persons in order to discuss the merits of their case.

#6: A criminal defence lawyer can leverage previous experience with the crown attorney or judge for your case.

Ontario criminal defence lawyers interact with various Crown attorneys, judges and justices of the peace on a regular basis. Over time, they develop a knowledge and understanding of how each Crown, judge or justice operates. This acquired knowledge is invaluable because it is an important part of knowing how to proceed on any given case. An experienced criminal defence lawyer can leverage his/her relationships throughout the Greater Toronto Area, including Mississauga, Brampton, Newmarket, Markham and Milton, and knowledge of the justice system in order to secure the best outcome for each client.

#7: A criminal defence lawyer can skillfully defend you during your trial.

Most importantly, if your matter proceeds to trial in an Ontario court, there will be a number of strategic decisions that will have to be made pre-trial and during trial that only an experienced criminal defence lawyer can make. If challenging the credibility of some or all of the Crown witnesses is crucial to establishing your defence, the ability to effectively cross-examine opposing witnesses is a difficult skill that can only be acquired over time. Why not leave it to the experts!

While you always have the right to defend yourself in your criminal trial, when your liberty and reputation are at stake, hiring a criminal defence lawyer is money well spent!